Wildlife Habitat at Home in the City


For a couple of years I have intentionally allowed a part of my front yard to grow wild. It started as a way of providing Buttercup, a very large tortoise, a place to graze. 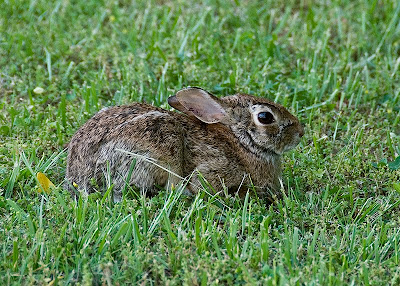 Since then it has become something of a habitat for rabbits (that is one of them in the picture), birds, and more insects than I can count. In addition, a number of young trees that I had been mowing down over the years have decided to emerge. Several junipers, a maple or two, and some unidentified larger growths as well. There are many different grasses and broad leaf plants added to the mix. I even harvested some viable grass seeds last year that I used elsewhere in the yard this year.

Most amazing of all, though was the little rabbit's nest, all lined with fur and marked by a well used pathway. It was a few square feet of wilderness right in my front yard. The rest of the place looked pretty normal. I mowed the grass around the habitat, kept the hedges trimmed, and even walked around the neighborhood picking up other peoples trash. Admittedly, I do not fertilize, water, or weed but I do mow. Actually I wish nobody would fertilize, water and weed. We would all be better off.

Imagine my surprise when I came home one day and found a sign in my yard that said I was in violation of some city code and that I had ten days to cut it all down or else! Here, read it yourself. 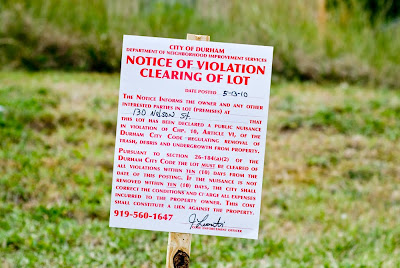 That's right, a public nuisance! Apparently somebody called the city to complain. The code enforcement officer from the Neighborhood Improvement Services Department came, took a look, and drove a sign-bearing wooden stake right into the heart of my front yard. Well, that might have been a little dramatic but you get the idea. This was absurd! What to do?

First I yanked up the  offending sign. Then I called the offending office.  After a couple of days of phone tag I finally got to talk to the code enforcement officer, the one who had driven the stake. (Okay, I know. I need to let that part go.) He explained that there was really no recourse. There had been a complaint and to him it looked like a neglected yard. What about an appeal? He said I could talk to his supervisor but unless it was some kind of wildlife habitat, there wasn't much he could do. He indicated that he was willing to come back to take another look and even bring his supervisor. I didn't want to involve any supervisors so we left it that I would get back to him about a second visit.

Meanwhile, back at the ranch, I had picked up on his reference to "some kind of wildlife habitat." So I went online to the National Wildlife Federation website and found out how to have my place designated as an official Wildlife Habitat. The process is pretty straightforward. You just answer a few questions that show your place provides shelter, food, water, etc for  wildlife and that's it. You pay a small fee (a little extra if you want a sign) and you are in. A few weeks later I had my certificate and a nice sign to replace the ugly wooden stake that had been driven . . .okay, I'll let it go now. 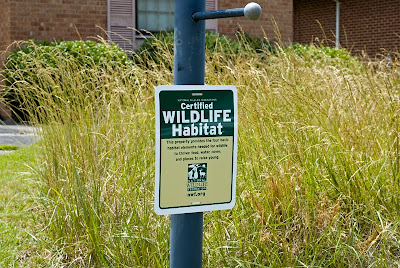 So there you are. From "Declared Public Nuisance" to "Certified Wildlife Habitat" in a matter of a few days.

This one has a good ending. The code enforcement officer came back to have another look. He agreed that it was exactly what I said it was, an intentional wildlife habitat (not simply the result of a negligent homeowner). He said he would make a note in my file and any further complaints would be directed to that note. We wound up talking about some miscellaneous gardening topics and other conservation efforts in the city including the Beaver Marsh Preserve maintained by the Ellerbe Creek Watershed Association. I left the situation happy with the outcome and, just as important, impressed with a city official who is open minded and professional enough to reconsider his own decision in the face of additional facts. He was even tempered, cordial and cooperative in every encounter. Many other officials would have simply dug in their heels and the battle would still be going on.

Since all of this started I have been seeing those Certified Wildlife Habitat signs popping up in a few other places around the city. Maybe one day I will see one at your place.

loved the info. and photos.
miss the marsh and all of you
abbey

this is so cool!
i just read your blog story & i am so jazzed that you were able to
switch a complaint & that wooden stake into a certified wildlife habitat!

hooray for the turtles & rabbits & bugs!
hooray for you.
thank you for the wonderful story.

This is awesome and encouraging! !

This is awesome and encouraging! !