Time at the Tracks

After much hesitation, I have finally resolved to begin a blog. I use the word "resolve" advisedly since, well, you know. Sometimes these things just do not have legs. For now let's just say I will try. 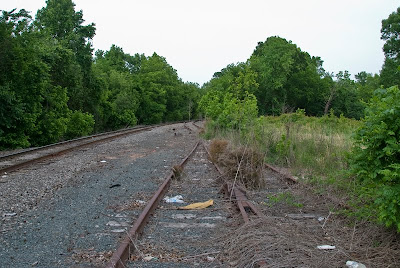 Recently I have been spending lots of time at a couple of sites in Durham, NC where I have been photographing railroad tracks. The two sites, one in East Durham near the old grain silos, the other near the new train station in downtown Durham, are both abandoned. The tracks have not been used in years. Ties are rotting, hardware is rusting, and vegetation is slowly reclaiming the tracks.

I go there because of an almost lifelong fascination with railroad tracks. My childhood wanderings often led me to the railroad tracks, either along some  neglected and rusty remote spur surrounded by woodlands or across the dangerous territory of an active urban switch yard. The engines and cars were thrilling to see up close but it was the mechanics of the track that always fascinated me. 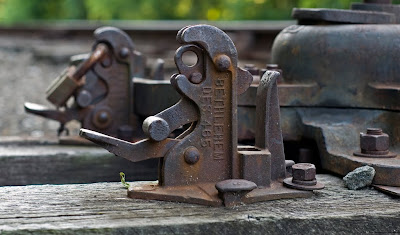 This current project is about those tracks, the old ones. The images are close examinations of what made the tracks work and survive. While it is a series about technology, it is also a series about human imagination. The images reflect the  sculptural elements inherent in engineering solutions to technological problems. They also show the interplay between industrial production of components and manual installation of those same components. It is industrial perfection vs. human imperfection. In some sense there are ghosts of dead industries present in the images, references to defunct US manufacturers and former steel cities. Some of the older spikes might show hammer blows from some long-gone Gandy dancer while others show the precise marks of hydraulic drivers, the new robotic dancers that sing no songs but have work rhythms nevertheless. It is about  progress and decay. 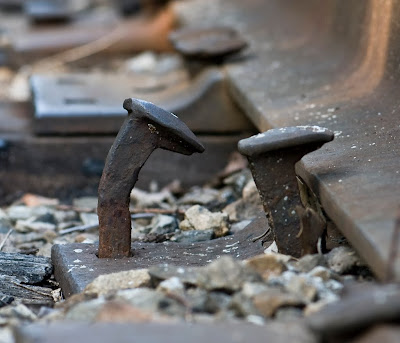 I have made a little slide show of some of the earliest images. You can find it at the Track Pix page on my website. This is only the beginning of a longer project that I hope will result in a show someday. For now the collection of images is growing and the project is taking on a life of its own.

In addition to making photographs of what I am seeing, I am also picking up little pieces of discards from years of track maintenance and track neglect. There are the railroad spikes, tie plates, track bolts, track anchors, and other odds and ends that I just pick up and bring home. Some of them have become parts of an ongoing sculptural exercise in my front yard. At some point these will be incorporated into a formal showing of photos and sculptures in some gallery or other public venue. That was a hint to any curators out there who might like to take this on. 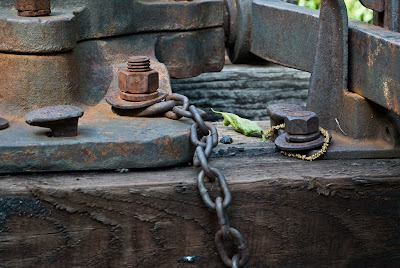 As much as anything, this is about childhood vision. I am going back to a place I loved and seeing it all over again, through he same eyes, naive, full of wonder and fascination, but now with a sense of perspective. All the time I am hoping a real train will happen by while I am there. It never happens. Not on these tracks.

Like many kids, I had toy trains (after a certain age we started calling them "model" trains because "toys" were not cool) and all of the interest in trains that came with that youthful territory. In the real world though, I was always most fascinated with the tracks themselves. Sure the Locomotives and various cars were great, but for me the infrastructure was the most interesting part. I just loved the tracks. I used to walk along the very tracks that were recently torn up to make way for the American Tobacco Trail. I loved to walk them, even the trestle that crossed South Roxboro Street, a dangerous enterprise that has its own set of stories.  Now that is where I ride my bike. The area is built up on all sides of the trail now. It is truly an urban trail. The temptation to leave it and wander around in the wilderness is gone.
Back in the day the tracks made their way through undeveloped territory, across streams, through woods and small farms, across roadways, and even through little neighborhoods. It was far from the urban area that is now that part of Durham City/County. One could stay on the tracks and see all sorts of wildlife from snakes sunning themselves on the rocky ballast to the occasional fox or deer who always seemed surprised to see a human on foot in their territory. The tracks were something like a main trail from which one could have any number of adventures. A little detour into the woods or along a stream would always lead back to the tracks. They were the marker, the way back home.
Posted by Bamboo Turtle at 12:40 AM

Great photos, Jim, and a timely series given current planning for a high speed rail system in parts of the state.
DTW

Lovely. Thanks for sharing this.
-jdeer

...a beautiful and intimate view of railroad tracks. When I was a teenager,two of my friends were killed in a car on the railroad tracks near my home in rural NC. The crossing did not have flashing lights or a safety arm. loisd

I remember an older train area in Warrenton that also had a Tennis Court and a old train that me and Jimmy Robinson used to hang around when we were trying and noticed I said trying because we weren't all that successful to play the game of Tennis.......Also I remember a friend of mine at Marquette who was also a avid train person...I think family of his was involved in the train business...Thanks for generating these thoughts with your blog....

Jim, . Trains!. Oh yes!. I get it, I get you! Thank you. What a great project and stories with it.[ Time at the Tracks ] You make me think that I was someone mesmerized by watching the trains go by in my childhood. Particularly the express train Madrid / Port-Bou, the French border. It always passed by the station at full windy speed. Total awe of Industrial arrogance...it was practically Impossible to read the small rectangular destination board on the deep green wagon coach's sidewall while people often waved to us from open windows... And seeing the people in the restaurant wagon sitting at their tables in soft orange light from their tiny ivory pleated lamp shades... I thought that, that must be the ultimate experience: eating while the surroundings moved. It took me sometime to understand how could the people and the waiters keep things from falling on the tables and off them at such an amazing speed,? The tracks themselves was something totally forbidden territory for me. We were told that if you stepped too long on them you will get stuck to them and not be able to remove your body until the train will run you over. So crossing rails at the crossroad became a major dangerous adventure in my mind. My vengeance though became to wait for the steam rollers to go under me while I watch them from the main village bridge. As the first white cloud disoriented me i will run to the other side as fast as I could to still catch the whiff of carbonilla, wood, and steam plus the powerful sound of the whistle. I was giddy. I needed more, much and many more. As I reached the other side of the bridge I was already in France, not in my summer village anymore. Just like that, in matter of seconds. Fortunately my clothes absorbed and kept the smells well after helping me to keep longer my new identity. R.