Who Else Lives Here?

The place I call home is home to others as well. Not all of them are cute, furry, or feathery. Once one gets past the bunnies, squirrels, and birds, there is much more to see.  I try to pay attention to the seldom seen beings and their stories when I can. This is a small collection of some of those episodes from my yard.  All of the images are from right here on Nelson Street. It is amazing how many dramas are played out on a small scale right under our noses. They are all parts of the ordinary cycles of life and death amongst the small creatures that for the most part escape our notice. For them almost every encounter is a zero sum game that has a definite winner and a definite loser. We can start with one I have rarely seen, let alone photographed. 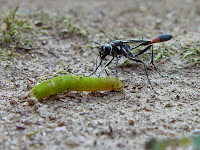 This female parasitic wasp has captured, stung, and paralyzed a caterpillar. She will drag it into a nesting hole she has dug in the ground. 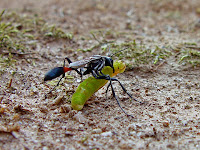 There she will entomb the caterpillar and lay a single egg. The caterpillar will remain alive but paralyzed and sealed in the hole until the young wasp hatches. You can guess what it eats until it is ready to emerge and begin the cycle all over again.

Had that unfortunate caterpillar escaped the sting of the wasp and lived to complete its normal life cycle, it might have grown up look something like this beauty just out of the chrysalis. 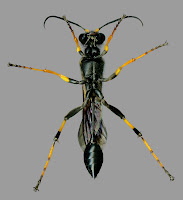 Then there is the magnificent black and yellow mud dauber as seen here from underneath. I caught this lovely one inside my house and couldn't pass up the opportunity to take a closer look. After keeping her in the fridge long enough to slow her down, I placed her on my scanner and got this image. She was later released unharmed. Mud daubers, another of the parasitic wasps, build those crusty clay nests that seem to show up under eaves, mailboxes and other protected places in our homes that we do not clean very often. They sting and paralyze (but not kill) mostly spiders which they stuff into cylindrical clay tubes. Once they have enough spiders in a tube, they lay a single egg on one of the spiders and seal the tube with clay. She may create multiple tubes, each containing one egg and enough spiders to do the job. Then the whole thing is plastered over to make it look like a clay blob. When the young ones hatch, -- well you know the story by now. I will do a more detailed blog on the mud daubers later.

Speaking of spiders, I don't necessarily recommend allowing black widow spiders to hang around in places that you frequent, but they do make interesting neighbors, worth paying attention to. 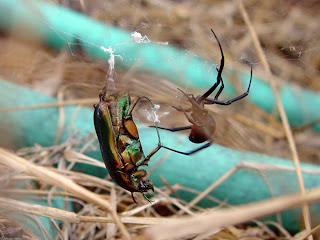 This one has just captured a June bug in her web. If all goes according to plan, she will wrap her prey with silk bindings, paralyze him with venom, inject digestive juices into the body, and leave the chemicals to do their work of turning the insides of the bug into a juicy pulp. Then she will return, suck out the nutritious bug juices, and discard the empty shell of a carcass.

June bugs are probably not a favorite prey for the spider. It would be a big meal but they  have too much strength and too much armor. This captive has already wrecked the web with his struggles. He eventually escaped before she could wrap him up. As it turns out, this arachnid mother  had more than a few mouths to feed. Shortly after the June bug escaped, dozens of miniature black widow spiders emerged from an egg sac that had been hanging hidden under a nearby rock. 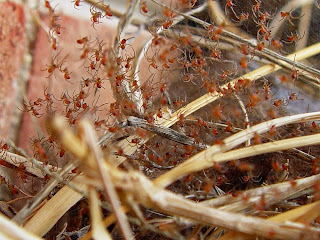 There is no way such a small area can accommodate that many black widow spiders. Most won't survive anyway since they are cannibalistic at that age. Others will fly away attached to a fine thread of silk blown by the wind. My guess is that some of them will wind up in one of those clay tubes that the mud daubers prepare.

My favorite predator neighbors are the preying mantises that show up every year. They deserve their own blog entry which is forthcoming. For now just consider this beauty looking back at me as I invade her space. Imagine being a fly and coming face to face with this. 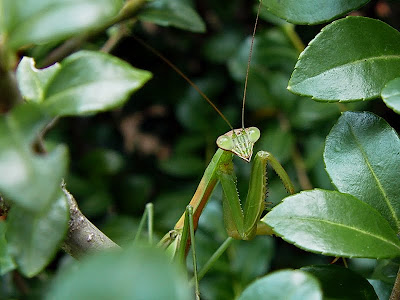 That's it for now. In future postings I'll talk in more detail about other specific animals or plants that inhabit this little corner of the ecosystem and share some of my photos of them. For now I hope you have enjoyed these little sketches.

The insects released a plethora of thoughts. W/O going into detail what is seen in the pictures and commentary is the natural order of things. What the insects and any other animal does is survival. The good thing is the insect or animal takes only what he needs to survive at the moment. The human takes everything he can get no matter all that is wasted. At the moment I am reading about the American Empire of global corporations and what they are doing to the world. It just makes these insects look good. Again, they take what they need, we take all.