The Magicicadas of Brood XIX 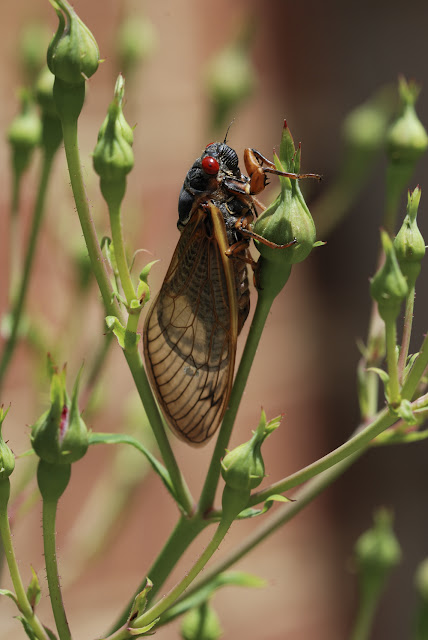 I didn't hear the phone. Or maybe I heard it and assumed it was my friend Alfred from Liberia who frequently calls at odd hours, ignoring the time difference between there and here. No matter. I missed the call that would certainly have gotten me out of bed at 2:30 in the morning and out of the house, camera in hand, to witness something I had never seen before.

My youngest son, Malik, was frantically trying to reach me to tell me about something he had never seen before either, the emergence of the Brood XIX cicadas right there in his back yard. He could hardly contain himself but in between the calls, he did have the presence of mind to grab his camera and start shooting. It was exactly what I would have done. Some of his pix are included in this blog along with my own.

The ground was full of the holes they had come out of and little brown cicada nymphs were crawling up every vertical surface they could find; tree trunks, vines, deck posts, chimneys, brick walls, lamp posts, anything that would get them off the ground. There they could shed those confining exoskeletons and free themselves to be those amazing flying, singing, adult red-eyed creatures that we only get to see every thirteen years. These very cicadas had been deep underground all this time, since 1998, feeding on the sap in tree roots, growing into adolescence, and waiting for just the right moment. Now was the time.

The shedding of that exoskeleton takes time during which the young adults are soft and vulnerable. It is something best done under cover of darkness to avoid predators and dehydration (or worse) from sunlight. They may look a bit strange, even alien at times, especially up close with spooky bottom lighting. But eventually the whole insect emerges with bright red eyes and very little visible pigment, It looks like a ghostly representation of its future adult self . Mark Doljes has posted an nice time lapse video of the whole process.

I was more excited for Malik than I was for myself because I knew that it would be something he would remember and recount for a long time. For him it would be one of those "Do you remember where you were when . . . ?" moments. I knew he could now count himself among the very few people who had actually witnessed the synchronized emergence of swarms of  those fascinating insects.

It was made all the more special because of the opportunity it gave my grandsons, Julius and Langston (Jules and Yaya). At first there was some fear to overcome. Those were "bugs" after all, and probably meant to be feared, disdained, avoided, or probably killed for daring to exist in the same space as humans. It was special to see it turn into fascination and maybe even respect. I hope this is just the beginning of a special relationship of curiosity and respect between them and the natural world. Cicadas are probably a good start. They don't bite, sting, or carry infectious diseases. Very cool little beasties.

I have always been fascinated by the cast-off shells of the emerging nymphs. They always looked much tougher than they actually are. As a child, I never really connected them to cicadas or any other bug that I knew of. When I found them, I imagined them to be rugged little suits of armor that were durable and somehow useful. Maybe they could decorate something or be used to make jewelry. How about making a slide for one of those bolo ties that I thought were so cool. It was never to be. The little shells were always too light, too thin, and way too fragile to be used for anything that my young mind could conceive. But, never give up. I still pick them up whenever I see them . . . and to this day they remain too light, too thin, and way too fragile. They do have this going for them. The tiny spines on the tips of their legs will cling to almost anything. Perfect temporary adornments to Summer t-shirts.

The cicadas we normally see and hear in this part of the country are called annual cicadas or dog day cicadas. They are the ones that, thanks to my dad, I knew as Grandpa Cricket when I was growing up. It is a story I have told in a previous blog. Some of them emerge and mature every year. They do spend long periods of time underground as nymphs but not as long as the magicicadas and they don't have a synchronous emergence. The males are much larger and their calls are individually loud. The late afternoon chorus is composed of easily distinguishable individuals, each taking his turn in that unmistakable rising and falling call.


The Brood XIX cicadas are different. They come out all together every thirteen years. The males are smaller and not as loud. Their numbers are so great that distinguishing individuals (at least for humans) is difficult. The chorus envelopes the ear with an ocean of cicada love songs that sounds like something from a B-grade Sci Fi movie.  Here is a sample recorded in mid May near the Eno River State Park in Durham.


Here is a version of the same scene with some of the closer cicadas and and other chirpers filtered out. To my ear it is more like what I heard in the park.


While this year's Brood XIX cicadas were a special treat for me, it is still the dog day cicada  that holds that special place in my heart. I count on seeing and hearing them every year, much later in the Summer,  even as they signal the beginning of the end of warm weather and the coming of another dreaded Winter. It was the dog day cicada, Grandpa Cricket,  that first taught me about the complex web of life that we know as nature. Things are never as simple as they seem. There is always more for us to observe, another set of things to be discovered, and another story to be told .

Nevertheless there was something special about the Brood XIX this year. I was aware of the 1998 emergence but I didn't experience it directly. This time, I actually saw some of the brood and I paid close attention to them . I photographed them and recorded their sounds.  I helped to introduce my grandchildren to them and I shared my youngest son's fascination with them. I can think forward to the next time they come. The grandkids will be teenagers, Malik will be in his fifties, and I . . .? Well, . . . thirteen years is a long time! 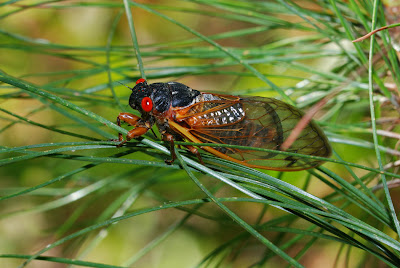 Posted by Bamboo Turtle at 1:32 PM

I love the intergenerational story line running parallel to (or, better, intertwined with) the story/photos of the emergence, the sounds and the lives of these mysterious and beautiful insects.
Incredible!
-Marjorie Scheer

One of the best narratives about the Brood XIX I've read, and with sound effects! Once again, you've made science fun, as your grandsons can attest. I absolutely LOVE the photo of them examining the shell, not quite sure whether to be enthralled or afraid. The pix, as usual, are fantastic. Your son has your gift at photography I see. I'm so glad you called this phenomenon to my attention early on so I could immerse myself in their sound on several occasions. And I wish you'd write more often. I always enjoy.

Thanks for this! You really got me going with this post!

I loved hearing your recording of their song. You captured it well. Joe and I were walking down to the Eno yesterday and were trying distinguish between the far song (which sound like a car alarm/white noise machine) compared to the individual cicada singers who were close by.

I first heard the 13-year cicadas when we moved into our home near the Eno, just before Nick was born. Here we were in our new little home in the country and all off a sudden we heard this horrible, incessant racket (accompanied by the casings of strange creatures left on the undersides of leaves).

A local fellow told us it was the 13-year "locust", which gave us a pause. Being pregnant, hot, with an infernal cicada racket made for quite a long summer.

Nick is now 12 and 1/2 and the magicicadas have returned. I, too, imagined how old I would be when the 13-year cicadas came 'round again. It is nice to know some cycles on earth are still with us -- and as we walked back from the park, the Cat Stevens song Father & Son ran through me head.

A little wake-up call from nature, perhaps; a soulful way to mark time.

Thank you for this thoughtful post! I was dive bombed for the better part of a work day when they first emerged in Chatham County.The intergenerational story, sounds and photos are a generous gift.
-Diane Robertson

The pictures are amazing ... thank you, thank you. I am so glad I get to experience this from Chicago.

Jim,
Nice of you to share this experience with others outside of the 'cicadadrome', an event to be remembered for sure.

Gosh, that top picture is Stunning.

I liked the sci-fi references. I can just picture a dog-eared painted paperback cover image- "The Cicada Men- they had waited 13 years..." (somebody needs to start a band called the Cicada Men, with spandex outfits and red goggles...not sure about the music...)

LOVE the bolo tie idea! HA! You are too much.

Thanks, a really lovely presentation, that I might refer others too in the future.
Best, Travis

Jim,
What a vicarious experience! Words, pictures and sound all add up.

Thank you for sharing your creative talent with us.

I'm finally around to this one given a perfect quiet moment to enjoy the splendor of the cacophony some call noise. I too grew up loving these calls of the season, and still yet look forward and cock the ear. But I'm forever one for the bird calls, and found myself almost too intently focusing on the beauty of birdsong. It caused another listen, and thanks for that as I know the cardinals, mockingbird, and I think a bluejay was struggling to get its song thru the loveliness of brood XIX. Peace and blessings in remembrance of the songsters Phoebe Snow, Gil Scott et al...... Love Ya Bruh! Peace, and keep doing what ya've always done, bringing light to all us!

Applauds to Malik too.

I've been meaning to write you for a while -- loved that you captured this. I tried, but could never catch the sound or the images. This was a real miracle of nature and one that my husband and I were entralled with (and my dog, who ate them like they were salted peanuts)...glad you shared this post (which I just shared this evening with family).

just stopping by to say hey