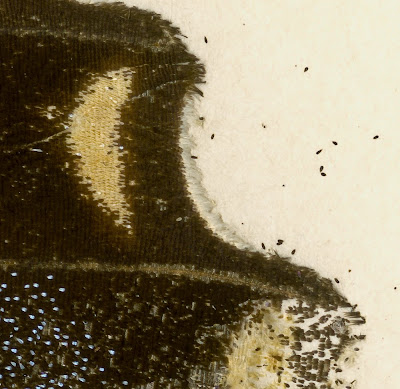 In some sense this is a continuation of the Cicada Story from a previous blog, but not really. There are no cicadas involved here and that turns out to be a real mystery. That will make more sense if you have read the previous entry. In any case . . .

It was in the mid nineteen seventies, many years after that first encounter with the cicada killer wasp, the one that took down Grandpa Cricket right before my eyes. I was spending a beautiful late Summer afternoon walking along the shore of Kerr Lake in Warren County, NC when I heard a strangely familiar sound. It was a kind of dull buzzing, almost brittle rattle.  Maybe like the sound of a crumpling cellophane candy wrapper, only not so brittle. But this was not paper and nothing so sweet as candy. This was a ruckus and it was coming from a patch of pine straw and dried leaves that only served to amplify the noise. As I went to investigate I somehow felt that I knew that sound and knew what I would find.

I was almost right.

There in the leaf litter a cicada killer wasp was wrestling with her prey. The ruckus I heard was the sound of clashing wings and rustling leaves. It didn't take long for all the struggling to stop and the victim to fall motionless and quiet. Quiet? Well, actually the victim never uttered a sound that I could hear, not even during the struggle. There was only the sound of the wings and the leaves.

I don't think I had seen one of those wasps up close for years, not since I saw one take down Grandpa Cricket, that larger than life figment of my childhood imagination. This time she had a surprise for me. Her prey was not a cicada. It was a butterfly! The cicada killer had attacked a butterfly, a tiger swallowtail. I had arrived just in time to watch the drama unfold. There was a brief struggle then all was quiet. She straddled the butterfly, grasped it by the body and tried to fly away with it. It should have been an easy task for her. After all, a butterfly is much lighter than her normal prey. But it was not to be. The load was light enough but much too cumbersome. The large butterfly wings were interfering with the wasp's flight. Each time she lifted off with the quarry, she had to drop it to the ground or fall out of the air herself. Her normally quick, graceful and powerful flight looked clumsy and amateurish. I watched her make several attempts to take the butterfly to the tomb she had prepared for him, a tomb that was in fact a nesting chamber for her soon-to-be brood. She was failing every time.

After many attempts she gave up or so I thought. Instead she had a  plan B. That is when I saw the most remarkable thing. She dropped the butterfly for the last time, landed on the ground nearby, crawled over to the victim, and  began to chew off the wings! First one wing, then another dropped to the ground. It was absolutely surgical. She methodically removed all four wings right where they attached to the thorax. Then she picked up the wingless butterfly body and flew away. They were gone in an instant, just like before. I stood there absolutely stunned. That little wasp had solved a problem in a very elegant way. I had already held the cicada killer in some esteem. After all, it was she who reduced Grandpa Cricket to a mere insect of manageable size. But now she had raised the bar. This insect could think! She had solved a problem right before my eyes.

After some moments of reflection, I picked up one of the butterfly wings and went home. That was enough adventure for one day. It supplied me with a story that I have shared many times, this being the latest. One of the great mysteries of that day is why I only took one of the wings. I left the others there, perhaps as testimony to what had happened. Not that anybody would be able to decipher the story from that little piece of evidence.

When I got home, I placed the wing in an envelope, quickly penciled in some notes, stuffed it in a notebook, and forgot about it. I think I had a haiku in mind when I made the notes but didn't want to take the time to properly construct one. It was some years later when I rediscovered that lone butterfly wing while browsing through one of my notebooks. It was badly deteriorated so I decided to mount it and keep the notes as they were, some form of imperfect, unrefined "lowku" with way too many syllables and lines to be anything else. I suppose I could use the first line as a title, then it would come close but that is not how I originally wrote it. Here is how it appeared in the notebook:

Now the wing, along with the original note, is matted, framed, and placed where I can see it from time to time. Nevertheless it has continued to deteriorate. The color has faded, pieces are missing, and the tiny scales that make up the mosaic of the design are falling off.  No doubt, though, this one lasted much longer than its mates, the three others I left lying there on the shore to tell the story to anybody who happened by and who was willing to listen.

Over the years I have continued to doubt myself and this accounting. Did I really see it? Would a cicada killer really switch prey species? Under what circumstances? What would the next generation prey on if they developed a taste for butterfly? I do know that prey switching is not uncommon in other predatory species. What about the parasitoids, do they switch? Could it have been another predatory wasp that large with those markings or another kind of predatory insect? How about a robber fly? No, not the right kind of mouth parts for the surgery. I have finally decided that this one was certainly a cicada killer who might have been adding extra provisions to a nesting cell for a female egg. The female larvae are bigger and require more food. There already could have been  a cicada or two in the chamber. The butterfly was just a little extra insurance (or dessert if you prefer). Entomologists please weigh in here.

I would love to have added one of my own photos of a cicada killer wasp but I wasn't able to get one this year. If you want to know what one looks like try this external link. Just be sure to come back here.

Posted by Bamboo Turtle at 8:00 AM

I love the story. It reflects your innate curiosity about the natural world, your patience, and your ability to wring a metaphor out of things that buzz and fly around us. I also liked the geeky parts. That's part of the charm of your writing. I thought I had set up an RSS feed to get your new blog posts but didn't work. :-( Glad you notified via Facebook.

What an amazing thing to to observe Jim...
Thank you for being one who is willing to bear witness to such as this. I am on the same page...the "wonder of looking close...

I must become a child again
unsheath the bright blade of wonder
to whittle any learning away...

Our days and seasons come like dew,
assuming perfect form,
then are burned away...

It is the passage only we can know...
this moment's pending of a bug,
this soundless passing of the snake-
a glimpse
Which gathers like wonder in a child's eye
sparkles, then is absent.